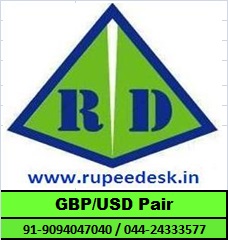 GBP/USD Pair after Opening at 1.2204 and made a high of 1.2214 and trading with a negative bias
throughout the day after violating 1.22 supports the pair has been trading negative for past many days after violating the supports of 1.24 so and now heading towards 1.2050 supports, so in today session likely to trade volatile with supports coming at 1.21 levels.

The Pound has continued to decline, clocking a new seven-week low at 1.2137, partly on broader dollar gains and partly on continued sterling underperformance. Signs of economic stagnation and the approaching start of the UK's negotiations to leave the EU (and associated risk that the SNP in Scotland calls for anther independence referendum) have been weighing on the pound. In the mid-year budget update the UK government raised its 2017 growth forecast from 1.4% to 2.0%, but in the four-year outlook revised the growth lower. The Inflation is seen peaking at 2.4% this year before dwindling slightly to an average rate of 2.3% in 2018, and then to 2.0% in 2019.